10 Days Silent Retreat in the Alpujarras

Most people who know me cannot imagine that. As much as I like to talk, I can also be silent. For two years I was always looking for a suitable silence retreat for me, but could not find anything. As I have learned now, “searching” does not work for me either. I just have to wait for what I want to come to me. So I just did not pursue the wish. 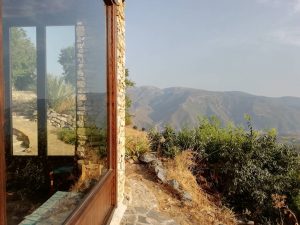 Since the information appears where you look, it came to me on Facebook when I discovered Tina Malia’s Event post: 10 days of meditation in silence and three concerts in the Alpujarras. The combination could not have been better. Apart from the desire for silence, I always wanted to spend some time in the Alpujarras. This mountainous region is just over an hour’s drive from Málaga. The foothills of the Sierra Nevada are known for the many foreign “hippies” who live there. I’ve always found that fascinating. And then of course Tina Malia, who has touched me deeply with her kind of mantras and singing world music. I was allowed to experience it two years ago at a bhakti camp with Jai Uttal in Barcelona. Only the seminar leader Noah from Norway I did not know, but that would not be an obstacle. I was open to his meditation sessions and most of it was supposed to be in silence anyway.

There are many ways, truth only one

Already in preparation for the seminar, I was so happy that after so many years, it was the first time I would put my mobile phone on flight mode for 10 days. Previously, I briefed my closest contacts and family with an emergency number, set my emails to an automatic response, and logged out on all social media channels. That alone already felt really good.

Living outside civilization has always had a charm for me 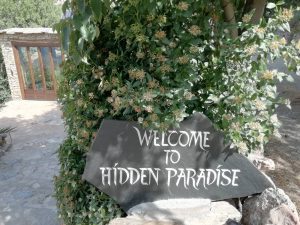 By entering the seminar on Friday evening, I was physically cut off from the outside world. The “Hidden Paradise” is one of the most beautiful retreat places I have ever seen. No matter where the eye looks, you can see the love and passion that is in every detail. Cut off from electricity and water supply, the owners, Julia and Rupert, have created a self-sufficient paradise for years. Power is generated by solar pallets and the kitchen, sanitary facilities, fruit trees, vegetable garden and even two pools are fed with spring water. This region of the Alpujarras is famous for its good spring water. Just around the mountain is the water company of the famous Spanish brand Lanjaron. 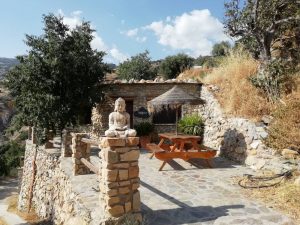 The different buildings with the bedrooms are made of pure natural materials such as stone, mixed sand concrete and wood. They adapt perfectly to the vegetation. The masterpieces are the tree houses. There are also two round wooden seminar rooms, such as the “Earth Temple” and the “Space Ship” for gatherings. The whole thing extends over a good height difference, so fitness is included. The group activities during a silent retreat are mostly reduced to sedentary meditation. So the walking up and down to the different houses was just right, because the food is simply outstanding. There are three whole-food, plant-based and gluten-free meals a day. Whoever wishes can also get cheese, goat’s milk and eggs from local “happy animals”. 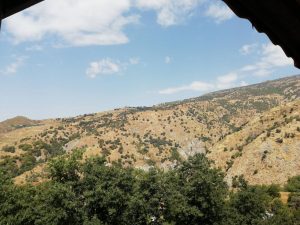 View on the mountain

Thus, the basic needs for a cozy home are created. I liked the hammocks on the panoramic terrace of the building “La Roca”. There I had my room. Amazingly you could pass the time by simply looking into the vastness of the valley or the mountains. I often closed my eyes there and just slept.

Without Internet, how is that possible?

I really enjoyed the “free time” and surprisingly did not even feel the need to look into the social media channels on my mobile phone. I always had my phone with me because it served as a clock and also as a flashlight. When I felt I wanted to tell someone outside the retreat something, I wrote that in my notebook and did not do it until I got back. A few times I wanted to look something up, search Google or Google Maps. So it was clear that I used my phone as a source of information. Also, I simply postponed questions about knowledge and I made the experience, it does not have to be done immediately. Also, not every question needs to be answered immediately.

At 7:30 in the morning we met in the “Earth Temple” for the first meditation of the day. It was still dim at this time. Slightly sleepy, I paid attention to every step when going down to the earth temple. On the way, I filled up my water bottle at the local spring. Breakfast was only at 9:00 clock. The morning meditation was the easiest for me, as the mind was in wake-up mode and the sun was not shining on the seminar grounds yet. 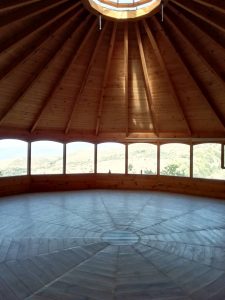 Some days I skipped breakfast to devote myself to my own yoga practice. I loved the peace and was happy to have a whole room for myself alone.
After breakfast or my yoga practice there was the second meditation. This usually had a topic that was communicated to us on a slip of paper at the entrance. Personally, I could not feel any difference in the energy of the different meditation themes in my body. Mostly I stuck to what I know from my Sivananda tradition.
I remain with my way of meditating, usually a few rounds of Aloma Viloma, the alternate nostral breathing to calm the mind. After that, japa, mantra repetition were on the agenda or I simply paid attention to inhalation and exhalation. Sometimes I also watched the other participants in the room, as some of them seemed to have already had a Kundalini awakening. Then, during deep meditation, the body twitches visibly from the outside. Apparently, it is not noticeable from the inside, as I learned after asking a participant at the end of the retreat.
After lunch, the third meditation practice of the day followed. For me usually the hardest exercise, since I like to rest a bit after dinner or like to have a Spanish “siesta”. But there should be a fine line between meditation and deep relaxation, the main thing is not to fall asleep. If my head was about to tilt forward during meditation, I simply opened my eyes. This should help against falling asleep. It is advantageous to look for a point and look into the void; in yoga, this is called the “Drishti”.
The longer meditation sessions of three hours were divided into sections. Mostly they begin with a sitting meditation and then breathing exercises in a circle. For this purpose, all seminar participants stand up, form a circle and take their hands. Then air is strongly inhaled through the nose for a few minutes and exhaled through the mouth. As soon as the hands do not touch anymore, you just breathe in and out of your nose. This is repeated a few times and ends with another sitting meditation or intuitive movement. I like the free movement the most. Without dancing music, moving my body freely, it reminded me a bit of “modern dance”. I also used this time to do some yoga exercises that felt really good. Once I practiced only Yin-Asanas for over an hour, keeping the positions for several minutes. It just feels great in the silence of a safe place.
At the end of most active or passive meditations, one settles in Savasana, the yoga-relaxation position. And after the last sitting evening meditation you go to bed. I usually fell asleep immediately. Doing nothing the whole day can also be exhausting.

The concerts with Tina Malia

Only after the concert evenings with Tina Malia I did not fall asleep immediately. This was partly because they usually ended later than the evening meditation and also the fact that mantras and music move me very much through my own practice.
The first concert with Tina Malia was on a Friday night. We were allowed to talk, that is: sing along. For me a wonderful experience, as I usually give a kirtan on Fridays and so had the pleasure to participate in a mantra singing and dancing.
The second concert, during the silence, was magical. I have never danced so quietly yet ecstatic before, I cannot describe it in words. Tina’s voice and listening to the music without producing any notes is a unique experience.
The last concert was my absolute favorite. After the six days of silence, we produced our first notes with an “om” on Saturday morning. In the evening there was the concert of Tina Malia with a mix of world music and mantras. Of course the mantras are very appealing to me and I enjoy dancing and singing, although I did not sing along as much as at the first concert. It is as if the voice has not yet returned to its full sound. That led to my absolutely best musical moment during the seminar. The last song is Tina Malia’s version of “Om Tryambakam” with spherical sounds. I lay on my back, spread my arms and let the music affect me. Then I could feel deep silence and calm in my body. It felt like what I would envision on a very good drug trip.

It’s like being in the eye of a tornado, total silence and tranquility.

I watched myself for some time, how I became quiet when it gets loud around me. Also in the breathing circle during the meditations, I felt my breathing slow down as the other’s breathing became more intense. That’s an interesting observation for me.
Deep meditation 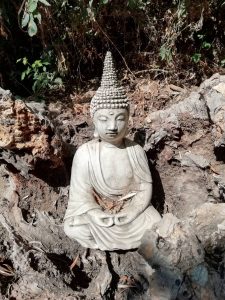 But if you ask me what the deepest silence was for me, it was in a silent meditation. The exciting thing is that I had previously been upset about something inwardly. I – who usually cannot be disturbed by anything – felt an inner heat rise in me and I could not verbally express it. And that’s where the balance comes into play. With this upward amplitude, in the ensuing meditation I had the deepest moment of attachment to myself and the universe. It was one of sitting meditation and for the first time I closed my eyes for an hour and just looked inward. I focused on breathing and relaxing my body. And then it was suddenly the moment when I was in harmony with myself and the world. I just felt good without doing anything.

I am very happy with the experience and it will certainly not be my last retreat in silence. The internal process that has been pushed during these days will continue for a while. I’m curious what else will happen. It is only a few days after the retreat and I’m still a little bit far away there and letting it all come slowly and relaxed.

A Silent Retreat, is that something for me?

I can only recommend a Silent Retreat to anyone who is willing to get involved for a few days. I think the environment and the freedom during these days are very important. We were allowed to move when and how we wanted and were allowed to write. From the latter, I have also sorted a few of my thoughts and got more clarity. As a result, I would like to communicate regularly on my blog.